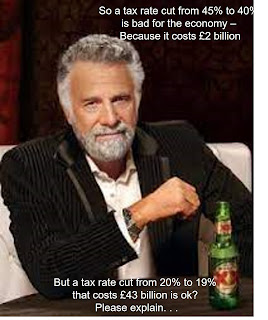 As the Hombre above confirms, the absolute shite that any thinking person has had to endure the last several weeks here in the UK is unbearable.
The problem, is that there are NO thinking people in the UK nowadays.  Just a group of fat, illiterate, Netflix watching, victimhood seeking drones.
And this doesn't even include Millennials; who are even worse!
The is absolutely true.  As the below link to even NPR, will show, with the Kwarteng being Kwazi Kwarteng, the then UK Finance Minister - LINK
Axing the top-earners tax rate would have cost about 2 billion pounds, a small share of the government's overall tax-cutting plan. Kwarteng said Monday that the government was sticking to its other tax policies, including a cut next year in the basic rate of income tax and a reversal of a corporation tax hike planned by the previous government.
The part about the Corporation Tax, is that Truss actually got the planned rise from 19% to 25% stopped, which I thought was basic Conservative Party principles, as in, "We're the party of low taxes." - Boy, was I wrong!
This apparently kicked off a run on the pound, with Truss panicking, and receiving little to no support from her party, which resulted in her sacking of Kwarteng and reversing the tax cuts.

This is the way it played out, but in reality, and with little to no mention in the MSM, the Euro and many other currencies had also seen their currencies sink against the Dollar, due NOT to any tax cuts, but to the Federal Reserve Board's strong dollar policy.
Remember - NOT ONE MENTION!
In fact, if anything, the Euro was not only sinking, but by an even LARGER amount than the Pound fell.

Interesting that.  No retaliation against the Euro, and the left-wing governments involved; Germany - with the SPD and French - with Macron.

Isn't that interesting?  Out of the 4 main western democracies, ONLY the UK has a non-leftist government.  And lo and behold, it was ONLY the UK, where there was a concerted attack against their currency. I will look at just WHO did this attack in Part 3, but that's another story.

What Truss should have done, is exactly what Boris had done in the past.

1) Held her ground, as the pound not only would've rose (it has), but it would have given her time to show that it was only a temporary thing.

2) Taken the Whip away from the bullies in her own government.  Basically, this makes them non-entities in the sphere of things, and they would've been welcome to resign if they really wanted to.

3) Hinted that there would be an investigation into just WHY the pound was falling - aimed solely at the monopolistic investing groups, who were responsible for this.

I know it may have been difficult, but certainly far less destructive and humiliating than what actually transpired.