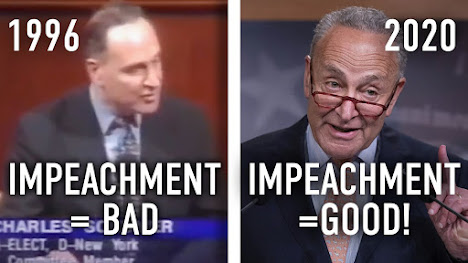 The current sham impeachment, complete with a non-attendance of a Judge from the Supreme Court, is as big a farce, and kangaroo court, as I’ve ever seen.  Why?  Do you even have to ask:

1) As this link plainly shows:

As it plainly states, Trump is gone, he CAN NOT be removed!  He is not in Office!

2) Insurrection?  Really?  Did Trump lead an armed force, to perform a coup d'état?  I only saw a gang of yahoos, who were LET into the capital building.  Who were led by a man with bullhorns, or a Viking hat on.  Please keep in mind, as this video shows, there have been many other things similar to this recently and no one was impeached, or the filth in the MSM didn’t say a fucking word about it!

3) Evidence has come to the fore, that this was all pre-planned, weeks before Trump spoke at the rally, thus to blame him is nothing, but pure hatred, from scum like Eric Swallwell, Jamie Raskin, etc.  Two filthy pieces of shit!.

4) The actual letting in of these people, had started BEFORE Trump had talked.

5) Trump reiterates that they were to go protest “in peace”.  Please go to YouTube, if you wish to find the clip on this.

6) There are numerous videos on the net, that clearly show AOC, the female Congresswoman with the James Brown hair, Senator Chuckie Schumer, etc, all heaving hate on Trump and ALSO encouraging people to fight or riot, yet they’ve been given a pass.  Once again, search YouTube for this, as I cannot be fucking bothered.

7) Finally, for that stinking, piece of shit, Jamie Raskin (boo hoo Raskin and your late son!), here is one clip, showing many types of dissention to Trump’s election in the Senate in 2017, with Old Joe Biden in the chair, where they challenge and tried to overrule the Electoral College for the election of 2016 - one of them is you Raskin, you hypocritical piece of trash - And then you have the gall to insinuate that Trump had NO right to do this, this time?  Suck my cock dry! 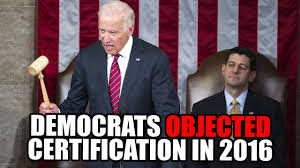 8) The “Removal Clause” in the Constitution, assumes that:

1) The President is immune from all crimes, so it is THEIR duty (The Congress) to do this, but ONLY when he is in office.

2) AFTER he leaves, then it is NOT their duty, and it is then hence, a civil / criminal matter for the normal procedures - if at all!  Schumer and the lot, know this, and thence, not that there will NEVER be any criminal charges against Trump.