Typically USA and UK centric - The "best" Universities in the World. Really? 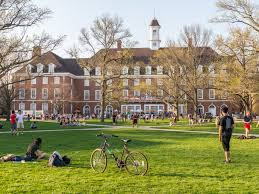 This link really says it all about our English-speaking arrogance, our notion that if you live in the US or the UK, that you're inherently superior to anyone else in this world!

As it says here in the London Times, there is not ONE worthy non-English speaking yoony in the world, that can hold a candle to all of these schools in the top 10 - What BS!

I can definitely remember a few years ago, when I believe it was the great Thomas Sowell, who lambasted Harvard or Yale (and presumably other Ivy League schools) when he said that the decent Professors or Teachers simply never taught or held tutorials with the the undergrads, which resulted in many of the years 1-4 being taught by Student Assistants or PhD candidates.

Contrast this with, for example Germany universities.  You mean to tell me that these institutions and the resulting genius of the German post-World War II economy have not contributed as much, as say a Harvard - with their multitude of Lawyer / Politicians, who have simply laid waste to a modern America?

Or, are you actually going to tell me that the other high number of Chinese universities, where there is a huge competitive demand to enter, are also third rate?

You know what I think of your ideas.