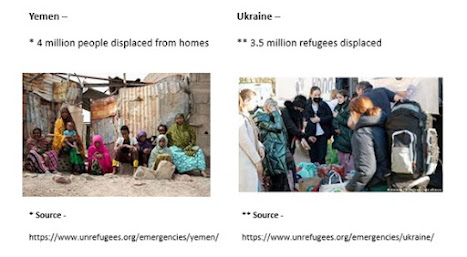 It's an awful old world, isn't it, so I'll leave you with the above, and who knows, it could be a meme!  Naturally, we hear NOTHING about the top left.

Not that I'm bothered, because even if it was to be reported on, NOTHING would happen about it.

I could go on, but will delve further into this in the coming days, with posts ranging from the DP World golf tour, to the blood money paid to release one "British" prisoner in Iran.

Also, more wit, wisdom and even some culture.

Email ThisBlogThis!Share to TwitterShare to FacebookShare to Pinterest
Labels: Ukraine, Week Ahead, Yemen