I remember seeing a report on the BBC in December or January (thought it may have been earlier in 2020, I am simply not sure), that noted that Trump was not a warmongering, neo-con bastard, but that still, Trump’s pull out from both Syrian and Afghanistan, could be “dangerous”! 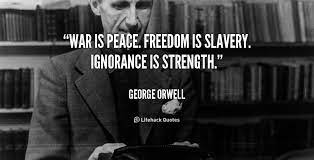 I felt to myself immediately about Orwell’s work, that referred to a point in the future when “peace” will be considered “war” - was it correct!

You simply can NOT make this garbage up, as the reports this time around were generally, ass-licking, grovelling, and downright lies.  As this report from Australia says, it was Trump who originally signed this agreement with the Taliban in February 2020, and it is Biden, who is actually both BREAKING AND DELAYING the withdrawal agreement.

This is disgusting, but it also shows the utter level of brainwashed ignorance among the typical ignoramus in society.

Email ThisBlogThis!Share to TwitterShare to FacebookShare to Pinterest
Labels: Biden, The Media