New Category; "Freak of the Fortnight"!

I've been meaning to do this for some time.  There are simply some of the leftist, fascist, globalist, woketards - which ever term you wish to use - who are simply so dreadful, that they must be brought to everyone's attention.  If you have any suggestions, please fire them to me for a mention!

My first choice, is none other than the State Governor of the once great state in the USA of Oregon - something called a "Kate Brown"; the name says it all doesn't it! 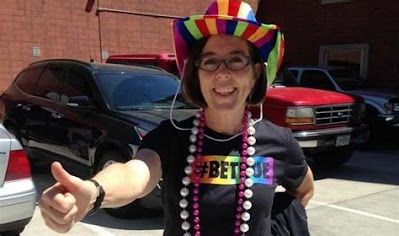 When I first heard about this gruesome creature, I IMMEDIATELY thought several things:

1) Never a private sector job in her life.

And my Lord, was I correct.  Just what IS it about these people, that they go out of their way to prove old cliché's about themselves?

According to her Wikipedia entry (I know, they lie and lie about people but seldom about their own fellow leftist / fascist / globalist):

* She's born in Spain, to a Doctor father.

* Grew up very privileged in Minnesota and transplanted to Oregon (Keep in mind Oregon at one time, had Republicans serving in the Federal Senate in Washington D.C. - Why is it that these disgusting Leftists, leave sinking, Blue states, only to go to the red or purple ones?).

And you only have to do a simple search, in a search engine of your choice, to find out that she is a borderline psychopath in her beliefs - try this for one (simply unbelievable!)

What is also very interesting, is that many people are finally waking up to revolting POSs like this, as she barely received half the vote in the most recent election to the governorship in Oregon.  I don't know if they have term limits there, but surely she could lose in the next state wide race.

Email ThisBlogThis!Share to TwitterShare to FacebookShare to Pinterest
Labels: FreakOfTheFortnight