What do the leftist critics / people who don't like us say?

I was recently called a "delusional narcissistic" by some effing fool who was trying to argue with me about the climate change sham. 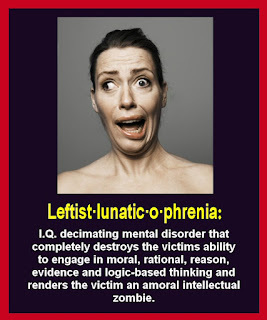 Why was I called this?  For the simple reason that I had referred to a website, Not a lot of People Know (outstanding by the way) that makes coherent, logical, counter-arguments to MANY of the MSM's prognostications about climate change.
The actual words were:
- - - - - - - - - - - - - - -

@Always Right  your account name is "Alwaya right" ... you're obviously a delusional narcissistic. You might want to change your name & attitude if you want intelligent people to engage in discussion with you. Now off you pop to rant at someone else. Bye now👋

As you can tell, he's a neurotic, poorly educated hick, full of hate and ignorance towards anyone with an independent brain.

If he would have liked to take part in the conversation, I would have told him that as a kid, I would collect rubbish / and other recyclables, as a way of making money and of cleaning up my home town.

I would also like to tell him, that not only does he know little, if any thing on this whole climate change spiel, but also, that he never actually tried to rebut any of my arguments, but purely tried to attack me personally.

In addition, since we always want some kind of dialogue with these people, though I do realise that this is now simply impossible with them, as they are both deranged and have a great many paranoias that they simply MUST do something about - is that I was fully on-board the whole climate change thing, UNTIL I read a summary of that original report in the mid-2000s, where it was stated by the IPPC that China and India would be exempt from it!

Any one with a brain, would then tell you that this whole thing was political.  I then started to read up on it, from an opposing, scientific side, and realised it was a con, and had nothing to do with science.

I despair!   There is simply NO debate or common ground with these nuts.