This was the Charleroi riots of 2000, during the 2000 European football championships. 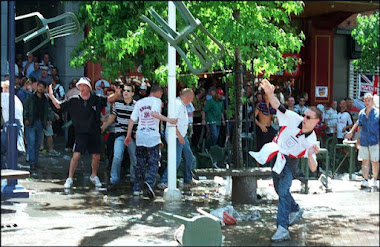 If memory serves me correct, I believe that a few hundred English fans "took on" several thousand cops . . .  and came out the winner!  Read that again, please.  They were outnumbered 10 to 1 and did NOT lose, besides fighting the opposing German fans.

As I wrote last week about the then, appalling behaviour of English fans in "storming" Wembley and taking other people's seats that they had not paid for - It's a sign of invincibility or I would prefer to call it, "unconquerability" - if that word even exists!

In addition, there were also the UEFA Cup Riots (or battle!) in 2000, that even has its own Wikipedia article; laid out as if it was a battle during World War I or II - Astounding!

But this simply ALWAYS happens with the British, or I would say, predominantly with the English, of all shapes, sizes and colours.  Look at this from earlier this week.  Where a mixed lot of combatants, tore into one another.  Tally Ho!

But also, this is earlier this year, in the same delightful English town of Luton.

I would ask, if this happens in a single country, anywhere else in the world?
My "cure" for  this is very simple, and will come to that later in the week.
Recht
Posted by Siempre Recht at 15:47